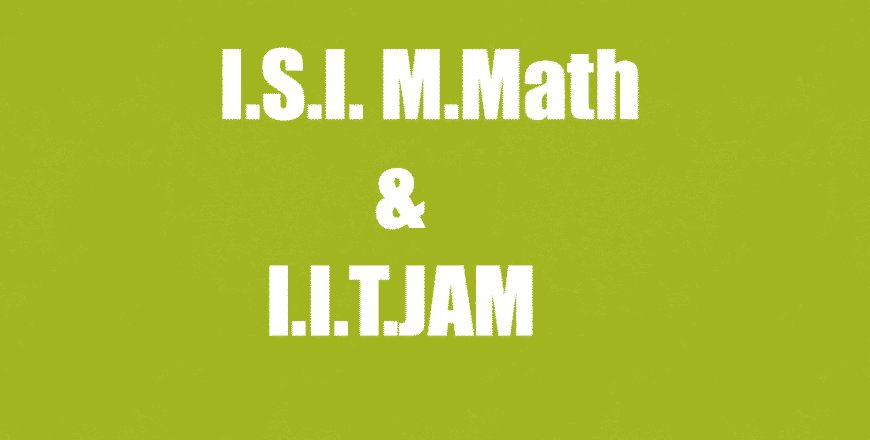 This course will be very challenging and loaded with very tough assignments. So if you feel that you don’t have time for some advanced level coursework and you already feel burdened with your semester syllabus then this course is not for you.

Every week we meet for 4 hours hours for learning and then there are assignments every week which you need to submit in the google classroom before the deadline, and we have tests every month to evaluate your progress.

We have both online and offline batches, offline batches are only operational at Kolkata, West Bengal, India. You will first have to take a trial class from one of our faculties and then you will have to sit for an exam which will be conducted online and then on the basis of your score we will decide whether you are eligible for admission. If you have cleared Regional Mathematics Olympiad or have an outstanding result in your boards then you are eligible for direct admission.

I myself have cracked ISI M.Math exam in the year 2015, so I will be sharing my experience with you all.
https://www.isical.ac.in/~deanweb/MMATHINTLIST2015.pdf

First, let’s talk about I.S.I. M.Math, the syllabus has recently changed from the year 2019. The first part i.e. the PMA section will no longer have questions from 10+2 level, now the mcqs will be mostly from college level mathematics. The syllabus mainly focus on the real analysis part from where half of the questions come in the subjective paper and the other half comes from linear algebra and abstract algebra. For real analysis start reading Introduction to Real Analysis by Robert G. Bartle & Donald R. Sherbert and then when you are done with your basics go for these two books Mathematical Analysis by Tom Apostol and Principles of Mathematical Analysis by Walter Rudin. One will help you with a much better theory coverage and the later one will has superb exercises. That’s what even I did when I was preparing for the exam. Then there is a part from metric space for which the book Topology of Metric Spaces by S. Kumaresan is the best with some nice examples and exercises and which will help you to solve the continuity problems from the book by Walter Rudin. You will have added advantage if you know complex analysis and topology.
Coming to the algebra part, you have one of the best video lecture series by Gilber Strang from MIT which is available on youtube. You can read the book Introduction to Linear Algebra by Serge Lang, and solve it’s exercises. This book has a different approach in Linear algebra and the eigenvalue exercise will have some questions which will be easier to solve if you had followed the approach of the book for eigenvalues. Solve the exercises from Linear Algebra by Hoffman & Kunze.
For the abstract part the best book is Abstract Algebra by David S. Dummit and Richard M. Foote, if you can cover this book then you are very much done, but for starters I would suggest Topics in algebra by Israel Nathan Herstein and Contemporary Abstract Algebra by Gallian. You will feel like reading a story book when you read the book by I.N. Herstein, the book has used group action to prove many things but haven’t used the word, “Group Action” and also the challenging problems in the exercises will be thrilling. The book by Gallian will have most of the theories covered and the exercises will help you clear your fundamentals.
Along with these solve the previous years papers and this will be enough for your written exam as well as the interview if you get a chance.

Questions will be set on the following and related topics.

For IITJAM: Will update soon…..

Time: 2 hours
Instructions. PMA is a multiple choice examination. Each of the following questions will have exactly one of the choices to be correct. You get four marks for each correct answer, one mark for each unanswered question, and zero marks for each incorrect answer.

Time: 2 hours
This section will contain 8 to 10 short answer type questions where you have to show all your work and prove what has been asked. Credit will be given to a partially correct answer. Do not feel discouraged if you cannot solve all the questions. This paper will be checked only when you clear the cut-off of the PMA paper.

For IITJAM: will update soon…..

For all ISI M.Math 2019 subjective Solutions and Discussions: Click Here

Be the first to add a review.